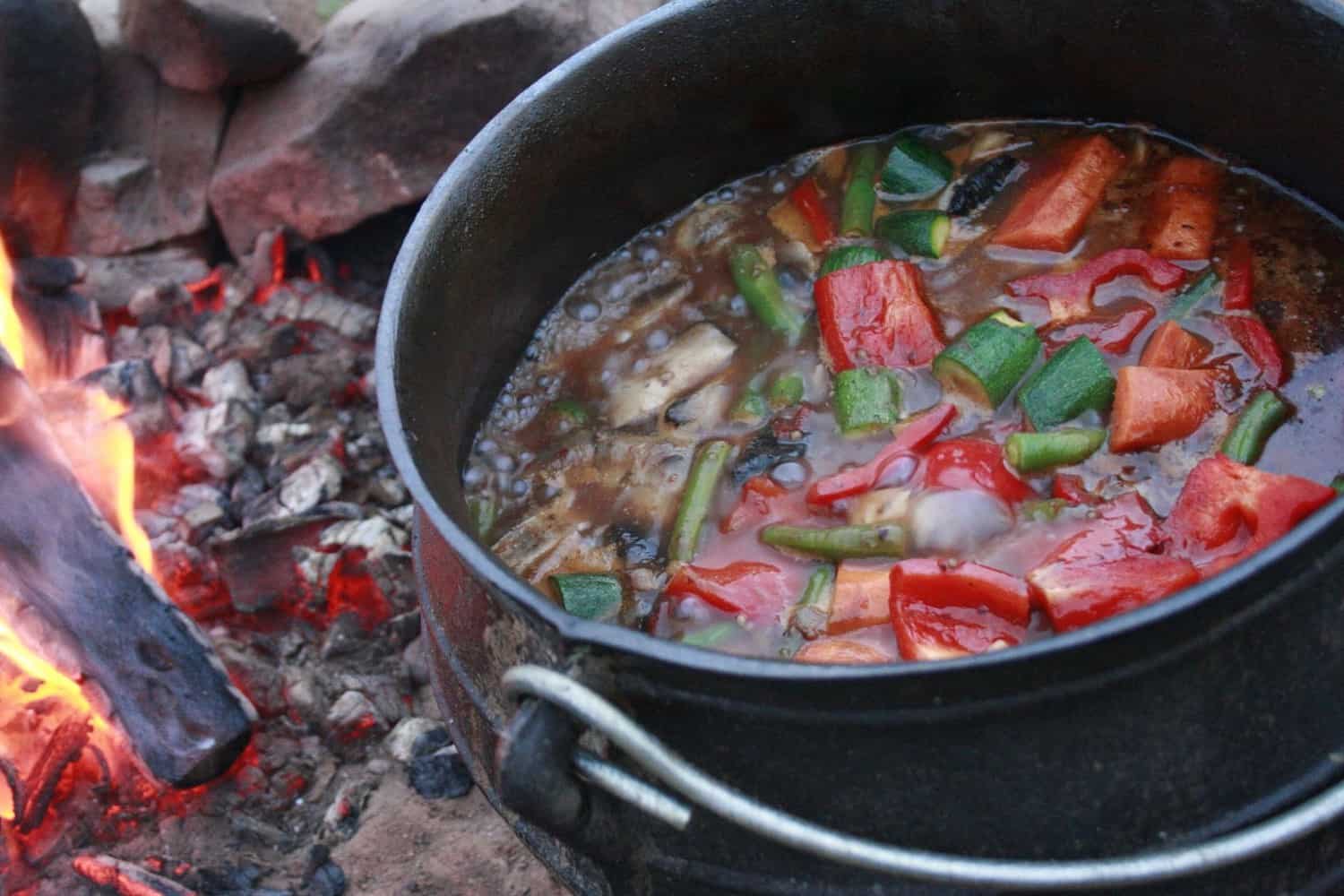 Potjiekos is an easy to make, traditional South African favourite. You may want to call it stew, but it is so much more!

South African potjiekos is a much loved traditional food that can be made with a wide variety of different ingredients. It is the method that makes it so unique and special. Yet, although it requires a fair amount of cooking time, potjiekos is very easy to make and involves very little effort.

As Afrikaans speakers will know, the word potjiekos directly translates to “small-pot food”. It is a meal with various ingredients layered and cooked in a three legged cast-iron pot called a potjie. Similar to a stew but with some important differences.

A potjie is traditionally cooked over hot coals for up to three hours, during which no stirring is done. The lack of stirring is crucial to the final outcome. Because, with potjiekos, you want to avoid mixing all your ingredients and their flavours together. The idea is to have a final dish in which you can visually identify most of the contents while also being able to taste each ingredient individually. This means that each mouthful will be full of a different set of flavours.

Normally, potjiekos includes one or more types of meat. Usually the favourite is lamb or venison, which was one of the original meats used. However, these days potjie could have beef, chicken, a combination of meat, or no meat at all.

Other than these basic contents, you should include some sort of stock liquid. Then you can also play around with various African spice combinations, as well as vinegar of some sort. More often than not the potjie master will add a red or white wine to the mix.

This chicken potjie is a particularly delicious one that uses a flavourful homemade sauce as part of the liquid added.

Ideally, you want to start the potjie by adding the meat first and allowing it to seal. Once properly sealed you move on to add things like onion, garlic and your herbs and spices. Then throw in some of your liquid stock and all of the vinegar of choice. At this point you may give the meat mix a stir.

Next, you stack layers of vegetables, in order of the time needed to cook them. Followed by the rest of your liquid. From here on out, you don’t stir the pot and simply let it sit and cook for two to three hours.

The Origins of the Potjie

In the mid 1600’s, Dutch settlers immigrated to South Africa from the Netherlands bringing their three legged cauldron-like cooking pot with them. The pot itself was incredibly useful for many purposes, such as for cooking, keeping food warm and storing meat when not being used. And so it became a staple favourite.

Although every culture has its own variety of a potjie, not all nations use the same cooking methods. Some examples are Dutch Ovens, also called casserole dishes by English speakers and used by many people across the world. In Japan, a pot called a Nabemono is used, and in Spain they have something called a cazuela.

Keeping your potjie oiled is essential to maintaining it. Oiling the pot is a form of curing it to prevent it from rusting and possibly ruining the next meal cooked in it.

First of all, if you have just bought a new potjie, you will need to break it in before using it for the first time. I would recommend sanding down the inside a bit, before washing it and then adding a healthy layer of oil, coating the inside entirely. After this you will want to heat it until the oil begins to smoke. Then let it cool a little before wiping out the inside with a paper towel. Then add another layer of oil and heat again before wiping out. Follow this process a few times, before giving the pot a final coat and cooking with it. If you have some old vegetables or leftovers, it is also a good idea to cook them in the pot once, before using your potjie for your first edible meal.

Once you have used your potjie for a meal, simply give it a wash with warm soapy water before coating the inside with oil and storing it. When washing, avoid scrubbing off all of your layers of previously applied oils.

If you want to experiment with some more traditional South African cuisine, I would recommend our local Bunny Chow for your next meal!