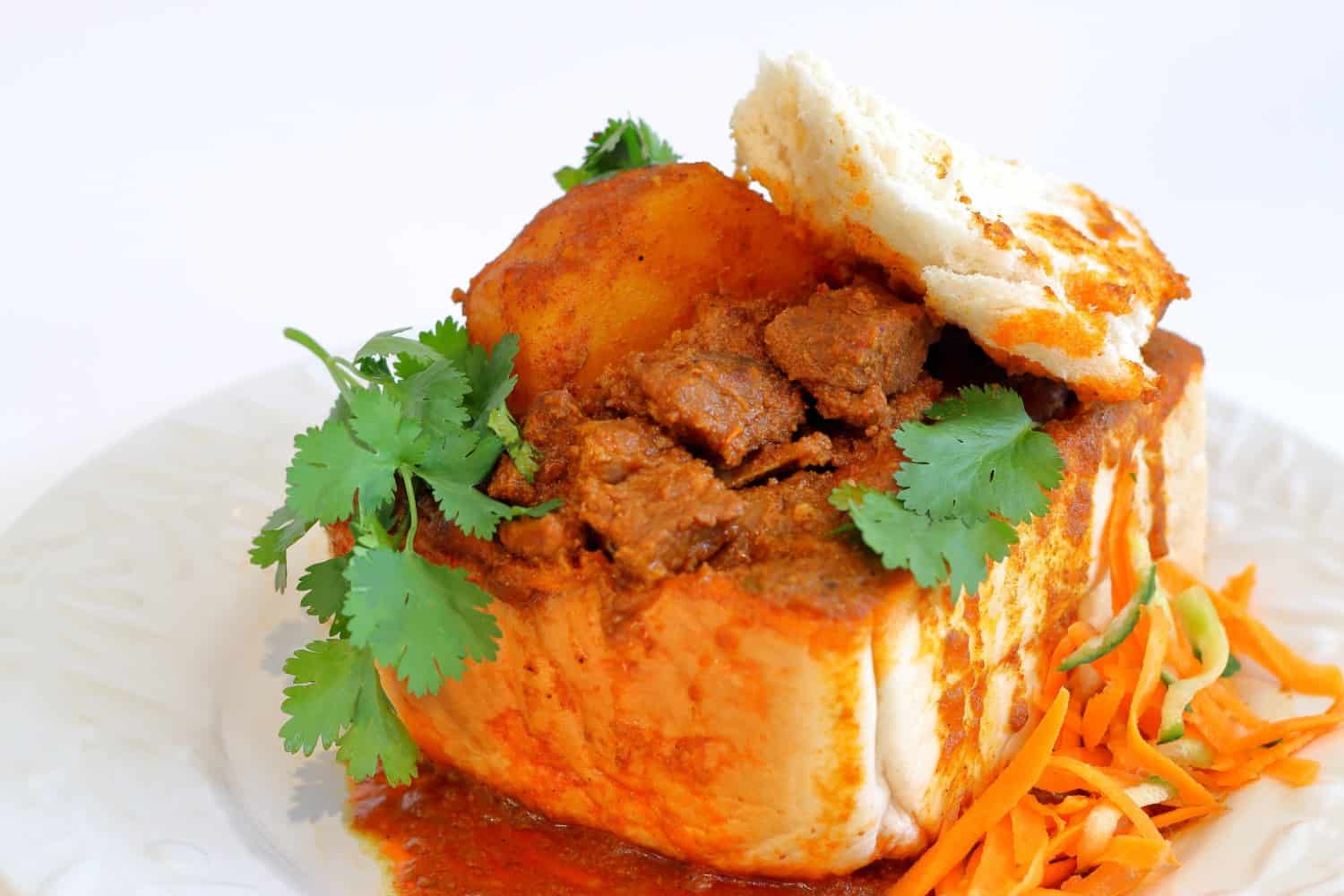 Bunny chow is an easy to make and versatile Indian style dish that is not only delicious but also has a story to tell.

Said to have been created over a century ago, South Africa’s local bunny chow has proven to be a popular dish among many communities. Its easy preparation and transportation have made it something of a local fast food. While it still provides a flavourful and warm homemade experience.

What is Bunny Chow?

Originally thought up by the Indian communities living in Durban, bunny chow is a delicious local curry dish. In essence, it is a sort of bread bowl, involving hollowing out a loaf of bread and filling it with curry. Most commonly, a traditional Indian curry is used, such as mutton or lamb, chicken or bean curry.

Although, as it is with most recipes, people have created many adaptations around this yummy concept. Your traditional bunny chow would incorporate curry, however, there is no reason why you couldn’t make a Mexican-style spicy mince filling. Or maybe a vegetable potjie stuffing. People have even taken it to a premium level by incorporating a special bread, such as ciabatta or sourdough.

There are a few restaurants that serve bunny chow. But it is very easy to make and I can definitely recommend having a go at making your own bunny chow at home. For example, this pulled chicken curry bunny chow recipe produces a particularly delicious dish.

Where does the Name Come from?

The word “bunny” in the name of the dish doesn’t actually have anything to do with bunnies. But is rather an adaptation of the term “bania”, which comes from the Sanskrit word for “merchant”. This was a term applied to pretty much all Indian immigrants who came to South Africa during the apartheid era.

The Origins of Bunny Chow

Its creation dates all the way back to the early 1900s. When migrants from British India arrived in KwaZulu-Natal. However, the precise origins of the dish are a little disputed. One story claims that the concept comes from the Indian labourers who came to work the plantations of KwaZulu-Natal. They needed a hassle-free way to transport their lunches to the feilds and eat them with ease. Another account tells that it was the Indians working as golf caddies who needed an easy-to-carry and easy-to-consume meal.

Although in all instances, the dish seems to have been created for the same reasons. Firstly, the roti, a traditional “bread” for Indian cuisine, would fall open and break. Making the curried fillings transportation tricky. Secondly, workers needed a lunch that was easy to eat. And at the time, apartheid rules prohibited many from publicly carrying sharp cutlery. To add to this, many restaurants of that time did not allow people of colour to eat inside. So the bread bowl concept for bunny chow was used to serve those that needed the food as a takeaway. Plus, it meant that the restaurant owners did not have to worry about the return of a serving dish.

Interestingly enough, you are unlikely to find the general public in India eating bunny chow. As it is an adaptation unique to South Africa.